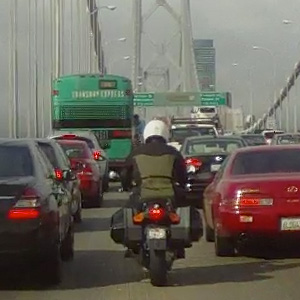 After Nevada’s lane splitting bill, AB236, died in the rush to get bills heard before the 2013 second house deadline, many asked “where was the AMA?” As a member myself, I’ve often been frustrated that the AMA hasn’t taken an advocacy position on lane splitting. Since I know riders from California organizations were helping out with AB236, I wanted to find out if the AMA had contributed support. I reached out to Nick Haris, the Western States Representative for the AMA to see what he had to say about these questions:

After a few emails back and forth, I received a statement from AMA Spokesperson Pete terHorst. He says:

Historically, the concept of lane splitting has been a regional issue with AMA members and motorcyclists in general. Where it is in widespread practice – California – the AMA endorses the concept and applauds the guidelines recently issued by the California Highway Patrol.

While lane splitting may be of interest in certain states, in many states riders have not identified lane splitting as a priority issue. In these cases, AMA members, clubs, and MROs are focusing their limited resources on ending motorcycle-only checkpoints, fighting raids on rider education funds, and defeating universal helmet laws, to name a few.

The AMA’s practice at the state level has been to support the efforts of motorcyclists that are consistent with AMA positions. Although the AMA Board of Directors has not adopted a formal position statement on lane splitting, the surge of interest in some states following the CHP’s recent issuance of guidelines has given the AMA board cause to revisit this issue. The AMA staff is currently preparing background information to assist the board with its decision.

While the AMA did not advocate openly or work behind the scenes in the case of the Nevada legislation, the AMA agrees with lane-splitting legislation that is not encumbered with conditions that discriminate against motorcyclists, such as rider training or additional insurance requirements.

For example, one of the most pervasive negative perceptions held by the general public concerns the issue of excessive motorcycle sound. AMA President and CEO Rob Dingman said as much in a 2009 interview: “The single greatest threat to motorcycling in America — both on- and off-highway, including ATVs — is excessive exhaust sound.” You can read the complete interview here: http://www.motorcycle-usa.com/669/2468/Motorcycle-Article/AMA-Outlines-Position-on-Sound-Regulations.aspx. The AMA board has also adopted a position statement on excessive sound. You can view it, as well as all of the AMA position statements, at http://www.americanmotorcyclist.com/rights/positionstatements.

There is an emerging issue that feeds the public’s negative perception of motorcyclists: “stunting” on public roads, which includes illegal activity by individual riders or groups of riders performing wheelies, stopping traffic, etc. In fact, in states where the practice of lane splitting is not legal, many motorists view lane splitting as stunting. Of note, there are AMA members living in states that do not permit lane splitting that oppose legalizing the practice because they are concerned about reinforcing the negative image of riders held by motorists… some even fear retribution by car and truck drivers. So state-by-state, the legalization of lane splitting faces significant hurdles.

With 220,000 members nationwide, the AMA represents a broad cross-section of motorcyclists in America. Yet many of the estimated 9.6 million owners of on- and off-highway motorcycles (Motorcycle Industry Council, 2009) do not belong to the AMA. With increased numbers comes strength, particularly at the legislative and regulatory level, and the AMA is working hard to attract and keep more members. One of the AMA’s newest efforts is the creation of state chapters (see http://www.americanmotorcyclist.com/AMAStateChapters). It is our belief that a strong network of state chapters will not only assist riders with the passage of motorcycle friendly legislation in their states, it will also created a foundation from which to reverse the often negative perception of motorcyclists at the state and local level.

I think this can be boiled down to a few simple points:

Let’s examine these a bit more as a whole.

The “state issue” position isn’t new, but I have to imagine (without access to member data) that the large number of riders in California, combined with significant interest in lane splitting demonstrated by legislation in Texas, Nevada and Oregon means that splitting isn’t just a California issue any more. California and Texas together represent a very sizable moto population.

The AMA is happy about the CHP guidelines and “agrees with” legislation that doesn’t have too many conditions. On the surface, this makes sense, but not supporting lane splitting legislation that would require additional training (which I haven’t actually seen in any of the proposed bills) is a dubious position. A lot of riders die every year because they lack good riding skills. More training – ignoring for a moment the personal freedom/”you can’t tell me what to do!” thing – is a good thing, not something to quibble about . It’s certainly not discrimination. The AMA seems to generally support rider education – see the AMA positions on helmet laws and rider education – so why call out this hypothetical point of dispute here?

The move by the AMA to re-examine splitting is a positive one, and combined with state chapters, could be meaningful, especially given that Texas (where a lane splitting bill very nearly became law) is one of the three pilot states, along with Illinois and New York. Given the size of the moto population in California, it’s unfortunate that California riders weren’t included in the pilot, but New York, Illinois and Texas all have significant urban areas that would benefit from lane splitting. There have even been petitions for NY and Texas already, so perhaps regional interest in lane splitting in these pilot states will be strong and thus influence the AMA’s position on this issue.

Negative perception of riders is an ongoing and very troubling issue. In the case of lane splitting, we have a segment of riders who split too fast and don’t stop if they clip someone’s mirror – these are the “lane splitters” drivers remember, not the proficient commute rider. This creates negative sentiment against lane splitting, creating common cries of “He came out of nowhere!” and “He must have been going 90 MPH between cars!” I’ve never heard a driver refer to splitting as stunting, but maybe that’s an exclusively non-California perception. So between stunting, loud pipes and a few motorcyclists riding in a very anti-social way, we’re heaping a fair amount of negative perception on ourselves as a community.

We here at LSIL still recommend joining MROs like the AMA and ABATE (I’m a member of both) to help us have a voice. But personally, I’d like my money to go more towards issues I care about – hopefully the state chapters are the beginning of more true regional focus by the AMA.