We’ve been following the progress of Nevada’s lane splitting bill, AB236, very closely. Despite passing with the Nevada Assembly with overwhelming support, the bill was amended in the Senate Transportation Committee to allow lane splitting only in stopped traffic, at no more than 10 MPH. Today, the bill was voted on by the full Senate and lost by a landslide, 16 to 5. 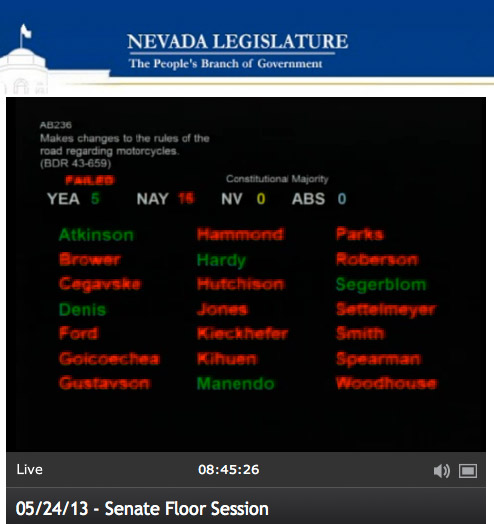 This is extremely disappointing in many ways. We’d heard from one of our sources that the bill was amended to ensure it would make it through, but that didn’t happen. Early on, the support for AB236 looked like this could potentially be a template for other states to follow. Unfortunately, California continues to stand alone in the US, as the only state to allow lane splitting. Of course, lane splitting / filtering / lane sharing is legal, accepted and expected in much of the rest of the world where motorcycles are much more common as daily transportation.

The amended bill would have allowed splitting in such limited form it’s almost unbelievable that it didn’t pass:

(a) Between moving or stationary vehicles occupying adjacent traffic lanes.

(b) Abreast of or overtake or pass another vehicle within the same traffic lane.

2. The provisions of subsection 1 do not apply to a police officer in the performance of his or her duty.

3. A person may drive a motorcycle between stationary vehicles occupying adjacent traffic lanes and traveling in the same direction as the motorcycle provided that:

(a) The person drives in a manner that is reasonable and proper, having due regard for the traffic, surface and width of the highway, the weather and other highway conditions; and

(b) The motorcycle, while driving between such vehicles does not travel at a speed which is more than 10 miles per hour.

Here’s the video of the vote:

And here’s the full text of AB236 as defeated by the Senate today: